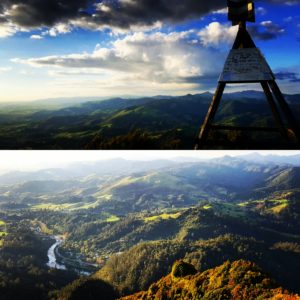 When the weather warms, plants bloom and the days get longer, it’s Spring and time to take our fitness outside and onto the trails!

Here are 5 benefits of exercising outdoors, number 3 is reason enough…

You work harder
When people exercise outside, they tend to spend more time doing it. Nothing makes you feel more childlike than being outdoors, you’re reducing stress hormones, increasing endorphins and increasing your levels of serotonin, so your mood brightens.

Being in nature lowers blood pressure
Spending time outside is also good for the heart. A recent study estimated that nearly 10% of people with high blood pressure could get their levels under control if they spent at least 30 minutes in a park each week, partly because of the heart-related benefits of getting fresh air and lowering stress.

It spurs cancer-fighting cells
Some research suggests that when people are in nature, they inhale aromatic compounds from plants called phytoncides . These can increase your number of white blood cells which supports the immune system and is linked with a lower risk of cancer. These cells are also believed to be important in fighting infections and inflammation. In one study, researchers found that people who took a long walk through a forest for two days in a row increased their natural killer cells by 50% and the activity of these cells by 56%. Those activity levels also remained 23% higher than usual for the month following those walks- WOW!

It can feel more fun
When people exercise outside, they feel better and enjoy the exercise more. Exercising outside is a great alternative for those who don’t want to go to the gym.

People who exercise outside report feeling more revitalized, engaged and energized than those who did it indoors. Research has also found that people who exercised outside felt less tension, anger and depression.

Your mental health improves
Nature has a way of making people feel calm, and exercising outside can strengthen that effect. Nature becomes a major distraction from all the stresses of life!

So time to lace up those shoes and hit the trails to reap the benefits.

This message is only visible to admins.

Sharing more adventure race goodness with a keen bunch of ladies in Cambridge at our skills weekend. ... See MoreSee Less

Share on FacebookShare on TwitterShare on Linked InShare by Email